Geo-Environmental were appointed to document the events leading up to an oil spill incident and provide advice on the subsequent clean-up operations at a former horticultural nursery site.

In addition it was requested by the Environment Agency that a Conceptual Site Model (CSM) be compiled in order to assess the risk to the site users (present and future) and the wider environment.

Before any of advice was able to be implemented, we were informed that overnight the tank had been deliberately moved by unauthorised trespassers leading to the spill of the remaining waste oil (approximately 5000 litres).

The spill now extended beyond the confines of the building onto an area surfaced in concrete to the east and had flowed to the west along a concrete road for approximately 100m, but did not extend off the road itself (with the exception of a small area at the extreme western end of the site). Given that the spill was no longer contained there was a significant risk of the oil going to ground, Geo-Environmental advised the client to report the spill to the Environment Agency and did so on behalf of the client and provided the additional advice in the column on the left.

Background to the Incident

It is understood that a contractor was appointed to remove a heating system for the derelict horticultural nurseries. The heating system comprised a large un-bunded heating oil tank partially filled with waste automotive oil, two boilers and a network of pipes (some running in culverts) to distribute heat throughout the glasshouses. The tank was within a commercial barn structure and was estimated to have a capacity of approximately 15,000 litres. It is unclear how much oil was contained within the tank at the time of the spill.

This was in contravention of the safe methods of removal that had been agreed with the contractor. In moving the tank, the pipework leading from the tank ruptured leading to a spill. The client was first aware of the spill when a member of staff made a site visit to monitor progress. It is understood that the appointed demolition contractor had left the scene and no further contact could be made. The client acted decisively and as the appointed consultant for the client, Geo-Environmental were asked to attend site to advise how to best deal with the spill.

How did we help

The remediation of the oil spill was supervised and documented by Geo-Environmental whilst the site work was undertaken by Demolition and Salvage Ltd. Within 24 hours the majority of the oil spill had been cleaned up. However, the clean-up operation continued for a further two weeks. 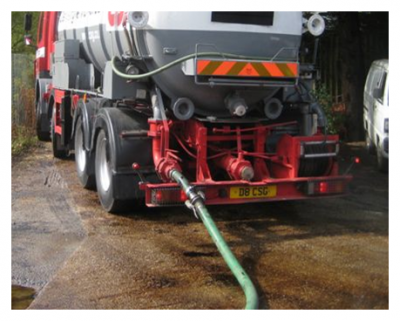 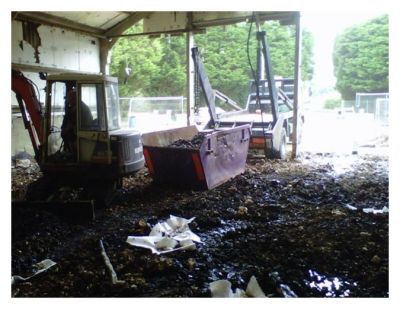 Whilst an incident of this nature is always serious, the client acted quickly in engaging with Geo-Environmental, who then quickly introduced measures to limit the spread of the spill and then clean it up, a much more serious incident was prevented.

It was considered that all practical steps had been undertaken to contain the spill along with sufficient remediation works to reduce the on-going risk to human health and the wider environment.

Geo-Environmental took a total of seven soil samples, from areas where the oil spill had been known to extend onto soft ground, which were then taken for laboratory testing in order to determine the concentrations of any residual contamination.

A graphical CSM (conceptual site model) was then compiled in order to assess the risk to the site users (present and future) and the wider environment.

The plan of action agreed and actioned at the time comprised the following:

Following this new incident at the site, Geo-Environmental gave further advice on how to best contain the spill: